Skip to content
Home Bolg How to choose the perfect toothbrush

How to choose the perfect toothbrush?

This question troubles many patients. Unfortunately, it is common for them to use the wrong toothbrushes. As a dentist, I repeat that it is we – dentists and dental hygienists – who should help patients choose the right toothbrush.

It is well known today that oral health has a huge impact on the condition of the entire body. Poor oral health causes a number of focal diseases, m.In. eyes, joints, kidneys and even the cardiovascular system. Tartar and inflammation of the gums are often the beginning of diseases developing not only in the mouth, but also throughout the body. That's why it's so important to choose a toothbrush and learn a brushing technique that will help prevent rapid tartar buildup and keep teeth and gums in good condition.

The patient has many products to choose from. Companies are releasing more and more new solutions to improve the efficiency of home toothbrushing. Several years ago, electric toothbrushes appeared on the market, which can be generally divided into those with a round head (rotary) or with a head that is close to a rectangular shape (sonic). Both have their pros and cons – personally, I am a fan of the round head, whose fibers precisely cover the crown of the tooth one by one.

Over the years, both technologies have evolved strongly, but no one has offered something – in my opinion – perfect – until now! Indeed, this year saw the groundbreaking launch of the new iO magnetic toothbrush. I have had the pleasure of testing it for two months now, and I can say with certainty that I have never used a better toothbrush – and I have used practically all that are available on the market. 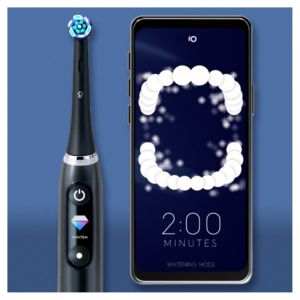 It can be said that a new platform of toothbrushes has emerged – after the sonic technology known since the 1960s. of the last century and the oscillation-rotation technology known since the 1990s. The latest magnetic technology combines oscillation-rotation action with gentle micro-vibration force. The linear magnetic drive is responsible for the frictionless transmission of energy directly to the ends of the bristles to gently and safely remove biofilm. What this means in clinical terms? We get a product that will allow us to brush our teeth better and more thoroughly.

The toothbrush has several modes of operation. In my opinion, one of the most important is the sensitive (gentle) mode – for patients with more delicate gums. It also has a mode for cleaning the tongue. The iO magnetic toothbrush is equipped with artificial intelligence and position sensors in the handle. The top-of-the-line iO series uses new 3D tooth monitoring technology that recognizes the lingual, buccal, palatal, labial and chewing surfaces being cleaned.

The excellent performance of iO is well demonstrated by the results of an eight-week clinical trial. In this study – as well as in the results of other clinical studies on round-head toothbrushes conducted over the years – iO left manual and sonic toothbrushes far behind, offering better cleaning of teeth and gums. Compared to a manual toothbrush, it provided patients:

– improved gum health, and 100% healthier gums in just one week.

I have noticed these effects in myself as well. Before I started using the new iO magnetic toothbrush, I had a professional dental cleaning with a hygienist and started testing. Usually after a period of two months there was a minimal deposit, while now it is not noticeable. 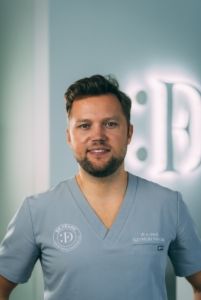 In conclusion, I can confidently recommend the new magnetic technology of electric toothbrushes, which, combined with the soft tip, is ideal even for teeth with hypersensitivity.

Long-term assistant and lecturer at the Department of Dental Surgery of the Dental Institute of the Medical University of Warsaw. Founder and owner of Dr. Frank Author Dental Clinic in Warsaw. Participant of numerous courses and scientific conferences. Author of publications and congress reports in the field of dental surgery, particularly interested in implanto-prosthetic treatment and bone regeneration techniques. Holder of a Certificate of Proficiency in Dental Implantology awarded by the Chapter on. Skills of the National Association of Dental Implantology. In 2016. obtained a doctorate in medicine. Lecturer at national and international scientific conferences. Member of the National Society of Dental Implantology (OSIS), the European Dental Implantology Society (EDI), the Polish Society of Dental and Maxillofacial Surgery.